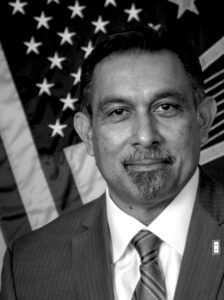 Jeremy H.G. Ibrahim serves as Of Counsel with the law and public policy firm of PobleteTamargo LLP. Based in Philadelphia, Pennsylvania he was born in Port of Spain, Trinidad, his family immigrated to the United States and settled in the Bronx, New York. During law school, he became a Naturalized United States Citizen.

On July 20, 2020, he was sworn in as the Department of the Navy’s (DoN) Chief of Staff to the Navy’s 77th Secretary. Chief Ibrahim was a member of the non-career Senior Executive Service with a 3 Star equivalent rank. He was responsible for the management of the Secretariat, coordination with the Commandant of Marine Corps and the Chief of Naval Operations, and advancement of policy, initiatives, and representation of the Department of the Navy on behalf of the Secretary.

The Secretariat agencies are led by presidential appointees who have been confirmed by the U.S. Senate (PAS) and include General Counsel, assistant secretaries of the Navy for Research, Development & Acquisition, Energy Installations & Environment, Manpower & Reserve Affairs,  Financial Management, and Comptroller, and the Director, Department of Navy Sexual Assault, Sexual Harassment and Suicide Prevention Office.

In his tour, Mr. Ibrahim established and led the Arctic Strategies Working Group (ASWG), resulting in the issuance of ‘a Blue Arctic. The Department of the Navy’s Strategic Blueprint for the Arctic.” Harnessing Department of the Navy resources and outside agencies, including the U.S. National Ice Center, the Naval War College, the National Geospatial-Intelligence Agency, and the U.S. Geological Survey, the blueprint was crafted to nest within DoN and Department of Defense operations, research, development, and acquisition forecasts. Development of the strategic blueprint was achieved through the direction of the ASWG and navigating the equities in the Arctic Region held by the Office of the Chief of Naval Operations (OPNAV), the Arctic Council, and members of Congress.

Chief Ibrahim traveled internationally and engaged with allied military leaders and political leaders to maintain and grow US Navy interests and relations. Engagements included discussions with the Ministers of Defense, Chiefs of Defense staff, Navy leadership, and civilian-military leadership from Bahrain, India, Romania, and India.

His international law experience includes serving as a Commissioner with the United States Foreign Claims Settlement Commission at the Department of Justice. He was nominated by the President and unanimously confirmed by the U.S. Senate (PAS). Mr. Ibrahim adjudicated claims by US citizens against foreign governments according to treaty terms with the United States. Programs included the Libyan Claims Program, the Cuban Claims Program, and the Albania Claims Program.

Early in his Philadelphia career, he was sworn in as an Assistant District Attorney, investigating and prosecuting narcotics offenses, violent crimes, and child abuse cases.  Later, as a Commissioner with the Philadelphia Commission on Human Relations, he was part of an agency responsible for the investigation and adjudication of discrimination claims in employment, housing, and services.

Since 1992, Mr. Ibrahim operated his own general law practice in which he practiced federal trial litigation in the United States District Courts for the Eastern District of Pennsylvania, the District of Delaware, the District of Columbia, the Third Circuit Court of Appeals, and the Court of Appeals for the Armed Services. A member of the Bar of the Commonwealth of Pennsylvania, he practiced international law, civil rights, employment discrimination, business, tort, and federal criminal law.

He has provided pro bono legal services to various police and Veteran organizations such as the Spanish American Law Enforcement Association and The Veteran’s Group.  He is a former Board Member and Officer of several non-profit organizations, such as Esperanza Inc., and treasurer of the Philadelphia Scholastic Rowing Association. In these roles, Mr. Ibrahim was charged with fiscal oversight, legal issues, human resources, and operations. He was a volunteer attorney with The Supervision to Aid Reentry (STAR) Program in the federal court in Philadelphia, assisting federal convicts in resolving civil legal matters to facilitate their reentry into society. He was a founding Board Member and served on the School Board for Esperanza Academy Charter High School in North Philadelphia, PA.

He received his law degree from The Columbus School of Law at the Catholic University of America in Washington, DC. His undergraduate studies focused on Philosophy and Spanish at Fordham University in the Bronx, New York.