The final decision that was issued provides us with two important lessons in the drafting and proposal of new regulations surrounding industries with rapidly growing and evolving technologies. As the Congress continues to tackle the regulatory aspects emerging from new innovations in the Unmanned Aircraft sector, they should consider not only the current laws and regulations, but be able to adapt and proactively address regulatory issues as they arise.

The D.C. Circuit Court of Appeals struck down the FAA’s registration rule because of Section 336 of the aforementioned Reform Act of 2012. Section 336 states that the FAA “may not promulgate any rule or regulation regarding a model aircraft, or an aircraft being developed as a model aircraft”.[iii]  According to the law, a model aircraft in this instance refers to an unmanned aircraft that is (1) capable of sustained flight in the atmosphere; (2) flown within visual line of sight of the person operating the aircraft; and (3) flown for hobby or recreational purposes.[iv]

The court agreed with Mr. Taylor’s argument that he was operating his UAV for recreational purposes only and met the standards which qualified his unmanned vehicle as a model aircraft. Because they noted Mr. Taylor was a hobbyist that flew his drones from his home and within the visual line of sight, the court agreed that the FAA overstepped its boundaries and found the drone registration rule a violation of the Reform Act of 2012. 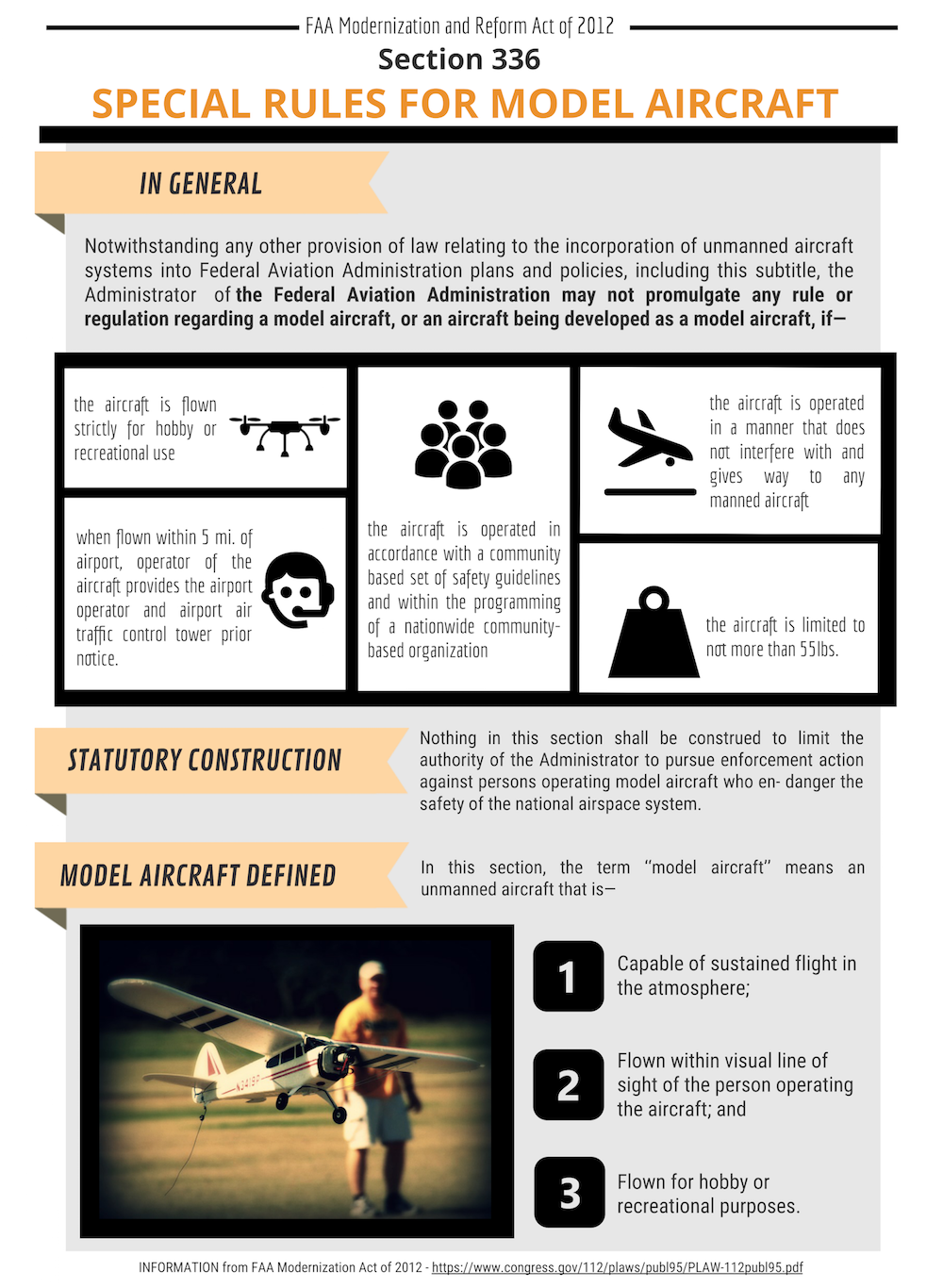 The drone industry is undergoing a technological revolution. Although, we think of drones as flying machines, technology is pushing for vehicles that will be self-driving. In fact, some developing drone designs are working on being able to transport people.[v]

The government’s challenge is to balance the need to innovate versus the challenge to regulate. Currently, the Federal Communications Commission and the Federal Trade Commission are applying the concept of regulatory humility to address this tension.[vi] FCC Chairman Ajit Pai recently explained this approach before the U.S.-India Business Counsel on March 29th. In his description, Chairman Pai discusses the importance of regulatory humility;

“That’s why—consistent with decades of bipartisan tradition—we are pursuing a light-touch regulatory approach. This approach suggests that the Internet should be free from heavy-handed government regulation. It seeks to eliminate unnecessary barriers to infrastructure investment that could stifle broadband deployment. It aims to minimize regulatory uncertainty, which can deter long-term investment decisions. It favors facilities-based competition—that is, creating an incentive to build one’s own network instead of relying on another’s (which depresses the deployment incentives of each).

It encourages competition among companies using any technology and from any sector—cable, telco, fixed wireless, mobile, and satellite. It embraces regulatory humility, knowing that this marketplace is dynamic and that preemptive regulation may have serious unintended consequences. And it places demands on the FCC itself—to be responsive to the public and to act as quickly as the industry it regulates. This regulatory approach, not the command-and-control rules of the 20th century, is most likely to promote digital infrastructure and opportunity.”[vii]

As we are able to process data at a quicker speed, the ability to analyze and assess a regulation’s impact on the economy becomes more immediate as the effects are almost instantly visible. As a result, agencies need to realize that their regulations would be open to assessment and review on an almost constant basis.

For the FAA and other federal agencies, it would be wise to assess the impact of their regulations since the marketplace has changed in their respective areas of industry. Technology is changing “the command and control approach” of federal agencies not just in telecommunications, but also in education, healthcare, and other industries.

In closing, this recent ruling by the DC Circuit Court of Appeals should be a wake-up call not only to the federal agencies, but also to the Congress. Both the Congress and Federal agencies need to be aware of the framework behind current laws and must also be ready to assess the impacts of the policies that are passed from both the Executive and Legislative branches.