How much money does Cuba owe?

How many claims are there?

What types of property was taken?

How much was taken from corporations? From individual citizens?

How was the value of property seized by the Cuban government determined?

How will these claims be paid off? What are the possible types of compensation?

Will these claimants ever receive compensation?

I have a certified claim, what now?

If I was not an American citizen at the time of the property taking, will I be able to certify my claim?

If I was an American citizen when the property was seized, but did not certify my claim during the Foreign Claims Settlement Commission program, can I still get paid?

For decades before the Communist takeover of Cuba in 1959, American families and enterprises contributed to the development of the Cuban nation. They lived, worked and had business in Cuba. Generations of Americans were born and raised in Cuba and contributed to the intimate relationship between the United States and the island nation only 90 miles off the coast which benefited both countries, supporting commerce, tourism, economic development, culture, and at one time, significant national security and defense interests to the Americans.

In January of 1959, Communists led by Fidel Castro overthrew a flawed Cuban government. One of the first things that the new government set out to do was to expropriate or confiscate real and personal property owned by American families, and later, those owned by Cuban families.

The first US corporate asset expropriated in March 1959, The Cuban Telephone Company, was a subsidiary of the International Telephone and Telegraph Company. Castro enacted a series of laws that would sanctify and allow his new government to expropriate all private properties on the island.

The decrees that were issued by the Castro government recognized property compensation and authorized the issuance of government bonds to former owners, though no bonds were ever distributed. Within two years, the Castro government had essentially stripped all American citizens of their rights to own property, unlawfully taking an estimated $1.8 billion in expropriated assets.

In 1962, President Kennedy signed Proclamation 3447, enacting the trade embargo on the Cuban government in retaliation for the confiscation of American properties and other hostile acts by the Castro regime.

In 1964, the US Congress passed legislation that allowed the Foreign Claims Settlement Commission (“FCSC”), under the Department of Justice, to begin the Cuba Claims Program under Title V of the International Claims Settlement Act of 1949. The program set out to certify and verify all property that American individuals and businesses had lost due to expropriation.

The FCSC considered claims of US nationals against the government of Cuba and determined the validity and amounts of each claim. Claims were based upon (1) losses resulting from the nationalization, expropriation, intervention, or other taking of, or special measures directed against, property by that government; and (2) the disability or death of nationals of the United States resulting from actions taken by or under the authority of that government, all of which had occurred on or after January 1, 1959.

A second program was conducted to consider claims which had occurred after May 1, 1967, and were not adjudicated under the first Cuban Claims Program. The program, that began in December 2005 and concluded in August 2006, received five claims and found two of those to be compensable. The total principal value of those claims were $51,128,926.95 and $16,000.00, respectively. 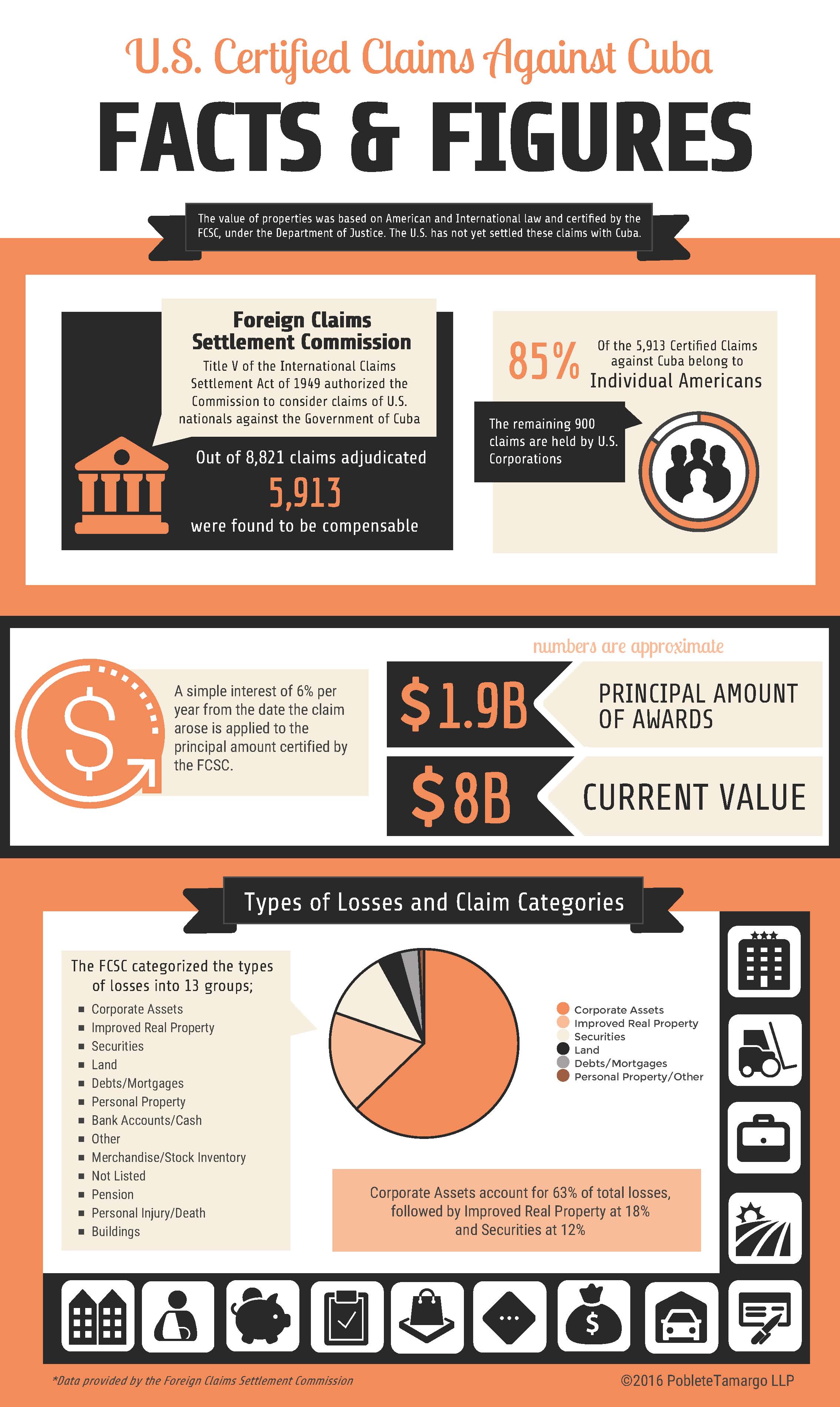 How much money does Cuba owe? At time of taking and current value

There is a simple interest of 6% per year from the date the claim arose that is applied to the principal amount certified by the FCSC.

How many claims are there?

Number of claims filed with the FCSC: 8821

Number of claims certified by the FCSC: 5,913

What types of property was taken?

How much was taken from corporations? From individual citizens?

How was the value of property seized by the Cuban government determined?

The value of properties was based on American and International law and certified by the Foreign Claims Settlement Commission, under the Department of Justice.

How will these claims be paid off? What are the possible types of compensation?

In the past, payments by other countries for claims have been made in one lump sum payment, blocked assets sometimes factored into that, and payments have been made over time in installments; however, other arrangements may be possible. The current bilateral talks must result in a settlement agreement in order to settle and pay these claims before the Congress can agree to lift the embargo against Cuba.

Will these claimants ever receive compensation?

Yes, the United States and Cuba have begun negotiations to discuss the settlement of claims. The first government-to-government claims discussion was held in Havana on December 8, 2015, the second on July 28, 2016, the third on May 16, 2016, and the fourth meeting in Washington DC, on September 29, 2016.

I have a certified claim, what now?

Contact the Foreign Claims Settlement Commission to ensure that they have updated your contact information for your claim.

In anticipation of a settlement, certified claimants should begin preparing and collecting all necessary documentation that will be required upon distribution of settlement award payments. All claimants will need to provide personal identification as well as documents and certificates that prove ownership of a claim. Claim holders by way of inheritance will also need to include evidence of probate or showing their relationship to the original claimant.

Lastly, contact your state representatives, Representatives and Senators in Congress, and let them know that you want their support in finding a fair resolution of your claim.

If I was not an American citizen at the time of the property taking, will I be able to certify my claim?

Pursuant to 22 U.S.C. 1643A(1) (2006), only American citizens at the time of the taking are eligible to present their claims to Foreign Claims Settlement Commission. There may be a process set up by Cuba or an international venue in the future for those non-American claims.

If I was an American citizen when the property was seized, but did not certify my claim during the Foreign Claims Settlement Commission program, can I still get paid?

The Certified Claims program needs to be initiated through an act of Congress or by the U.S. Secretary of State. Depending on the complexity of the potential claim, the Department of State may be able to try to include it in the current talks. If the State Department is unable to include it in the current bilateral agreement, you would certainly want an agreement that does not preclude your claim from being compensated in the future.