What is the Guam World War II Loyalty Recognition Act?

Who is Handling the Claims Process?

Who is Eligible to File a Claim?

When Can I File a Claim?

What Documents Will Be Needed to File a Claim?

How Long Do I Have to File a Claim?

How Much is Being Paid for Compensation? 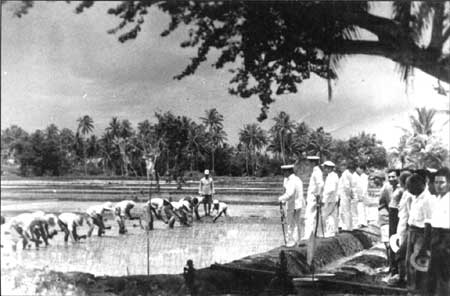 During World War II, the U.S. government largely ceded the American territory of Guam to Japanese control. Throughout approximately 32 months of Japanese rule on the island, the indigenous people of Guam endured life under the military occupation by Japan. The people of Guam were forced to build defense infrastructures and were relocated to the center of the island. The Japanese maintained control until July 1944.

For decades, the people of Guam have sought recognition by the U.S. government of the significant war crimes committed against Guam’s indigenous people during the occupation of the U.S. territory by Japan. In December 2016, the 2017 National Defense Authorization Act was passed, and included a measure to provide reparations to Guam’s World War II survivors.

These Frequently Asked Questions will be updated as more information becomes available. Please contact PobleteTamargo, LLP if you have a specific inquiry or would like assistance in filing a claim.

What is the Guam World War II Loyalty Recognition Act?

Under the National Defense Authorization Act of 2017, Title LXXIII Guam World War II Loyalty Recognition Act, the Secretary of the Treasury shall establish in the Treasury of the United States a special fund for the payment of claims certified by the Foreign Claims Settlement Commission and submitted by compensable Guam claimants. The Guam World War II Loyalty Recognition Act recognizes the suffering of residents of Guam during the Japanese occupation of the island during World War II. The Act provides a claims process to residents of Guam that were subjected to unspeakable harm as a result of the occupation by Imperial Japanese military forces, by being subjected to death, rape, severe personal injury, personal injury, forced labor, forced march or internment. The Act establishes a Claims Fund under the Treasury of the United States for the payment of claims submitted by compensable Guam victims and survivors of compensable Guam decedents.

Who is handling the Claims Process?

The Foreign Claims Settlement Commission (the “Commission”), under the Department of Justice, will adjudicate claims under the Guam Claims Program and determine the eligibility of individuals for payment. Over it’s sixty-year history the Commission has overseen 43 previous claims programs that were administered on behalf of the United States Government. Mauricio Tamargo, a Poblete Tamargo partner, was the chairman of the Foreign Claims Settlement Commission and oversaw, and was also chairman of, the Guam War Claims Review Commission (the “Guam Commission”) eleven years ago. The Guam War Claims Review Commission found that additional compensation should be provided to the people of Guam. The Guam Commission’s report, which was approved unanimously by Commission members, became the bases for the legislation establishing the Guam Claims Program. The Foreign Claims Settlement Commission is authorized by the United States government to adjudicate these claims and issue rulings which will decide all questions of fact and legality based on the laws of the United States and the regulations of the Commission and international claims law.

Who is eligible to file a claim?

There are four categories of claimants that are eligible to file a claim under the Guam Claims Program as authorized by the Guam World War II Loyalty Recognition Act. The categories are defined as follows. Three of the categories are claims that are filed by those living, who were in Guam during the attack and occupation of Guam by Imperial Japanese military forces during World War II, or incident to the liberation of Guam by the United States military forces. Those categories include the following:

When can I file a claim?

What documents will be needed to file a claim?

Specific documentation and information will depend on the type of claim that is being filed. Our Firm will assist claimants in preparing their claim and all the necessary supporting documentation. The Statement of Claim form is accompanied by an affidavit attesting to the facts required for establishing eligibility, including details of the injury or harm the claimant alleges to have suffered, to the best of your ability. The statement must be sworn/affirmed before a notary. Other evidence, though it is not required, can be submitted to further support the claim and is recommended, especially for personal injury claims.

Examples of such documentation include, but are not limited to the following; birth certificates, death certificates, marriage certificates, old correspondence or bills showing date and Guam addresses, hospital or clinic medical records, or old photos.

How long do I have to file a claim?

The authorizing statute directs the Commission to create a one year filing period that begins on the date of publication of the rules by the Commission.

How much is being paid for compensation?

Payments for compensation are based on what the claimant may have endured:

Filing a Claim Under the Guam War Claims Program